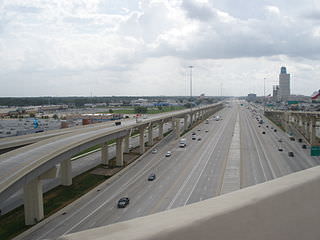 Police in Houston are looking for the attacker and his accomplice, Assistant Police Chief Bobby Dobbins told reporters Thursday night.

Daniel Gotera, a sports reporter at KHOU-TV was on the freeway during the attack. He described the event on Twitter as an “unreal scene.” According to Gotera, the man got “out of his car with gun just shooting in the middle of freeway.”