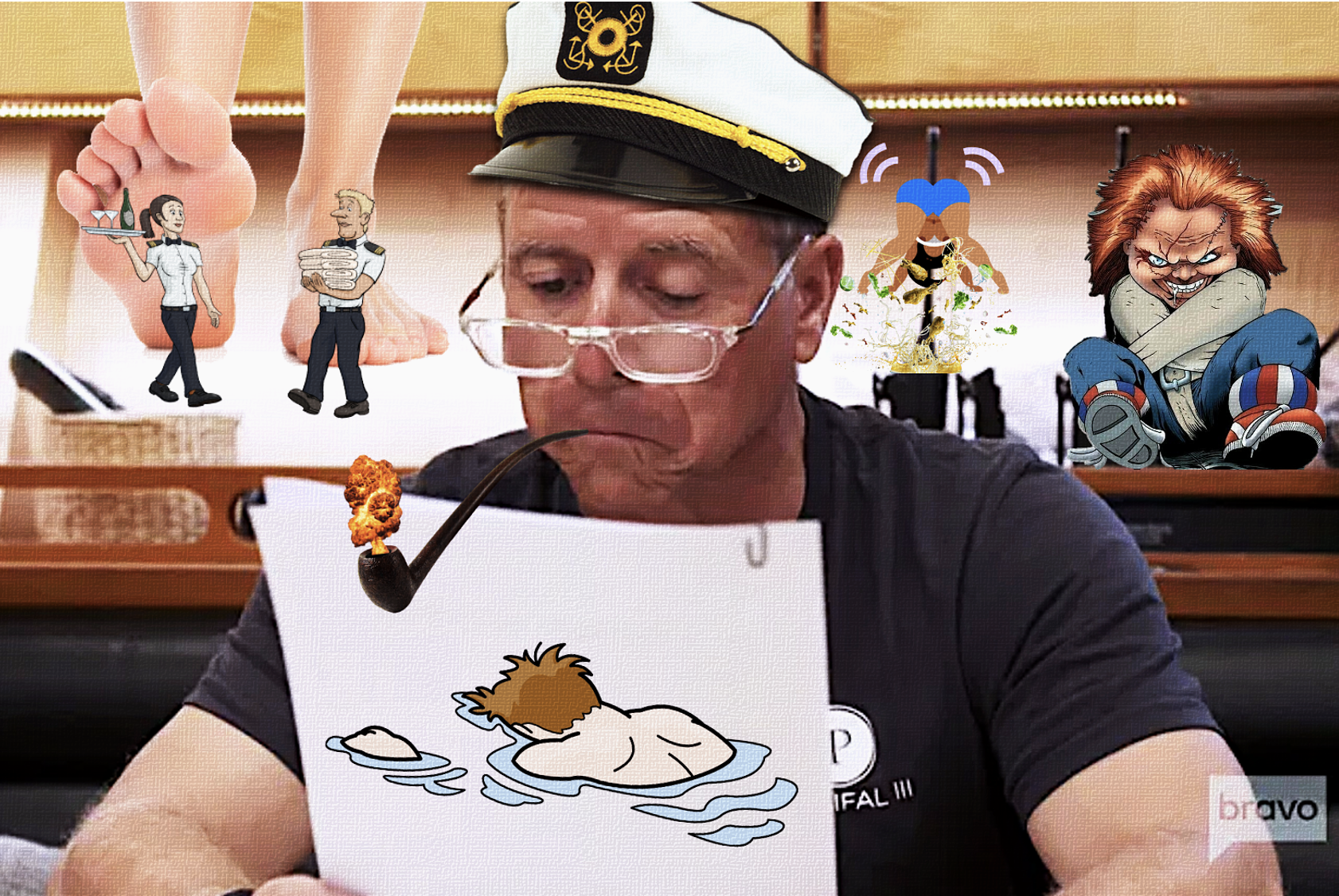 The crew got to serve a yachty slave crew. Captain confided his dick needed a wide angle lens to capture its full impact. Daisy couldn't leave the boat without making a feminine princess feel like she's worthless for liking scum dick. Colin has a crush on scum dick. He has a jealous eye and a broken heart. I hope he goes home, mourns his dog and makes peace with it. Sydney became diseased when the first mate rejected her. She smashed her vagina in front of the men and all they could do was swallow hard. Natasha was amusing. Alli is destined to be made fool of again, probably by Gary, on future TV. Gary needs to go oink. A good 12 inches should fix her. Bitch be cleaning the boat with her tongue. Sorry, mate. Samantha and giant Darrin were not promoted to anything. Bummer. 14-Jun-2021
The crew agreed that Gary should have never been born then promoted him. Gypsy woman entrapped Green Giant into having babies. Naughty mope. She'll take a green card from anywhere. Captain Pop got slurpy. Spydeck remains an enigma. Sydney still horny. 07-Jun-2021
It was the Hocus Pocus charter. Giant discovered his dick turned red because the bruja is using pussy cement. (I told you!) One of the high commanders from the witch colony claimed the coven was rejecting her because she was the most plastically altered/beautiful. I couldn't tell them apart. Captain was nerve wracked. He seemed like he was going to call his crew idiots and jump ship. Natasha served dessert in a trough for pigs. Really? Plastic people can make irreverent comments about lowly people but the lowliest should never be caught criticizing them. "We pay for the servitude, so shut up!" Poor Alli. Those bitches. 24-May-2021
The Captain was done in by mammoth equipment. A charter of women came to lounge, dispute and to show America that their lifestyle isn't healthy for anyone. The giant's penis is turning red and the culprit wants to jump ship. Brown girl lied. Daisy celebrated. Gary is living his best life. 18-May-2021
No critique. I felt like I was watching a special episode of Baywatch or worst, Flipper and took pity on them. 11-May-2021
Daisy was murdered and it had nothing to do with Natasha. Captain Pop was as befuddled by Daisy's lame attempt at a Murder Mystery Dinner as we were. He looked like the only adult at a kids' table. He should have been included somehow. It's not befitting a captain to appear lost. There are so many excellent swimmers on staff. Why didn't one of the crew get pushed overboard? It would have been dramatic. The giant saved the day then got disgusted when his chiquita showed interest in Alli's labia. The Chucky of the Sea tried to give Sydney a rise by making out with Alli like she was Sofia the First. Sydney got her revenge by informing the viewers how inadequate the Chuck is in bed. 03-May-2021