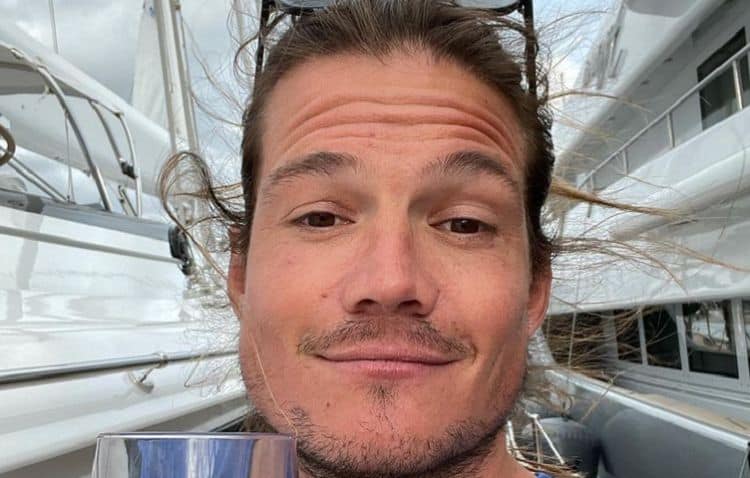 Daisy exclaimed that the sock in Gary's pants is bullshit. Tiny fucker. Yum.
Captain brought his macaroni dick to guest's table and moved back so the charter could enjoy it. Good man. Gary darling made out with a boy and a girl but neither dared sit on him. Whew! Good to know there's only one rapist on Gary's love boat. 31-May-2022
The charter was a surgically enhanced female empowerment group. The type whose procedures make them look twenty years older because only old ladies need them. Why did it become serious when one charter member big splashed? Were they expecting a big sprinkle? One of the non-second stews left a fat sock in Captain's pant crotch. Did Chef Dos Latinos serve dessert with a little spoon because the Captain was dining with the charter or because he knew I would notice it? The Captain should have shown up for dinner in a jockstrap because all the women could talk about was Gary, Gary, Gary. Captain served the ladies macaroni crotch for breakfast but none of the women looked down. I would have stood on the table. The raped one was deliriously content making out with a non-second steward, giving fuck you stares to the rapist and riling up Ms. Long Ago. A man handles rape a little different. I'm not sure about this but I think a non-second stew stuck a similar sock in Gary's pants. 24-May-2022
Lord Salmon Decker has sexual amnesia. The sex was either very horrible or it felt illegal. Either way, amnesia is the best way out of the situation. Ashley couldn't keep her mouth shut and confessed every detail of the rape on video and audio on a loop. Yo, stop. I'm sure there's help waiting for her when they dock. They're wearing crew whites without any stripes. They will find her. Gary is the hero for fighting rape by not giving it the two cents it doesn't deserve. It's just another lousy fuck. It's not like shee reeped hiz ash to shereddss!!! 17-May-2022
If you unexpectedly slide it into Gary, he'll only notice a change in temperature. Chef Dos Latinos was perplexed by boobs so he made great food. Gary thinks that a male to female deck can do better than a female to female hand. Ashley thinks she should be promoted for raping a man and getting rid of Encanto. 11-May-2022
Gary got raped by a baby stew. The stew was giving the beautiful intoxication a massage when he fell asleep. He rolled over with a hard-on and she sat on it. Rape! Male whores sometimes get their rapes and hook-ups mixed up especially when they can't remember them. Double rape! HE DID NOT CONSENT! HE WAS UNCONSCIOUS! He'll feel the pain once he's 55+ and has a compulsive desire to sue her. Gabriela did everyone a favor by booking her mental illness out of there. I know Chef Dos Latinos was tired of that Encanto bitch. Daisy's woman in charge consists of granting her crew the power to let her fuck with their heads. Is that why Gabby left? Nope, it was Gary's fault. Cuddling with a salmon mermaid that's going to fuck you over is a mental no no. Colin and Gabby watching Gary snog with baby's breath made his ass clench and her mind/vagina explode. Did the captain remove a peanut butter cup from its wrapper and replace it with a dollop of peanut butter? That is so cat. I think I understand captain's giant cracker fetish. He doesn't want to shit the boat when he tilts it. 19-Apr-2022