Florida will become the third state in the US to require students to learn more about mental health, behind Virginia and New York.

The Florida State Board of Education voted on Wednesday to require public schools to provide students in grades six and above a minimum of five hours of mental health education annually.

According to the department's press release, the curriculum will include: awareness of signs and symptoms, the process for getting or seeking help for themselves or others, awareness of resources and what to do or say to peers struggling with mental health disorders.

The NRA denies the reality of gun violence. Doctors like me know it all too well.

Last week, the Annals of Internal Medicine published a set of guidelines by the Health and Public Policy Committee of the American College of Physicians (ACP) addressing the problem of firearm-related injuries and death from a public health perspective.

The National Rifle Association (NRA) quickly rebuked the journal — and physicians in general — on Twitter, saying: “Someone should tell self-important anti-gun doctors to stay in their lane.”

As a gun rights advocacy group, the NRA’s sharp critique was entirely expected. But the eruption from my physician colleagues on social media was startling. Responding to the NRA’s central point — that doctors should “stay in their lane” on the topic of guns — medical professionals created a viral hashtag, #ThisISMyLane (also #ThisISOurLane), sharing vivid stories of their clinical experiences with gunshot wound victims, arguing that, despite what the NRA might believe, the issue falls unavoidably into the laps of medical practitioners.

Are You Supposed to Poop Every Day?

Some days you might find yourself in and out of the toilet, and some days might go by without a single visit for a Number Two. Should this be a cause for concern?

We asked five experts if we have to poop every day. 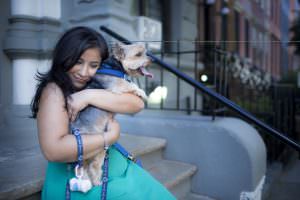 Vargas, 31, grew up in East Harlem, New York. From the age of 14, she’s been diagnosed with various mental health problems including major depression, anxiety, and borderline personality disorder. In 2014, wanting to add further focus to her activism and knowledge to her internal biblioteca, Vargas dug through the internet in search of accurate visual depictions of the multifarious, layered experience of mental health she well knows—but to little avail. Instead, she said, she was met with images of people who “nine times out of ten were white” in historical images, photographs of white women, or both.

Homeowners have always come up with clever ways to scare away potential burglars. They leave the television on while they’re away, install dummy cameras or plant the classic “BEWARE OF DOG” sign in the front yard, even though it’s just a teacup poodle in the backyard.

A new “skill” for Amazon’s Echo smart speaker takes things a step further: Away Mode attempts to trick potential burglars into thinking somebody is home by playing long audio clips that sound like real – albeit absurd – conversations that could be happening inside.

Akron’s public schools have a major problem; its at-risk students are falling well behind the rest of the K-12 population in the classroom. The question the district faces now is whether LeBron James can fix that.

James’ I Promise School opened Monday to serve low-income and at-risk students in his hometown, and the public school could be an agent of change in the eastern Ohio city. The institution is the intersection of James’ philanthropic Family Foundation and the I Promise Network he helped kickstart. I Promise began as an Akron-based non-profit aimed at boosting achievement for younger students from disadvantaged backgrounds. Now the movement has the means to educate these students year-round. 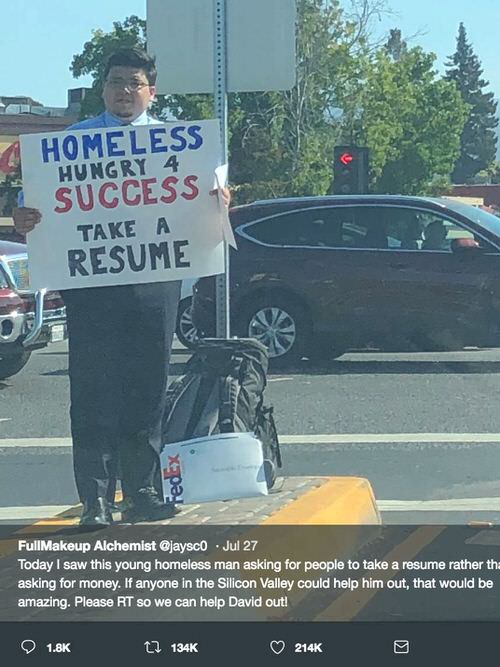 A young man stood on a street median in Mountain View, California, the tech-hub home of companies like Google, with a sign: "Homeless / Hungry 4 success / Take a resume."

David Casarez moved to Silicon Valley with three years' experience as a software developer and a degree from Texas A&M University. That's according to a series of Twitter posts by @jaysc0, who relayed Casarez's story and resume.

"We spoke for about an hour," said the Twitter user, identified as Jasmine Scofield. "He came to the Silicon Valley with a dream to be successful in tech and has a lot to offer the community. He’s sleeping in parks & still trying to get freelance work, interviews, and applications in."

A few weeks ago, a guy named Chris wandered into a local Lawrence, Kansas, city council discussion about local bodywork licenses. Head bowed reverently over the podium with a prepared speech in hand, Chris stepped up and took a stand for something he apparently truly believed in: the right for massage therapists to give "genital massages."

While Yelp will forever be a battleground of hot takes and battles between business owners and customers, the site won a legal skirmish that, for now, protects it from liability over negative reviews.

Maine Sen. Susan Collins, a moderate Republican who professes to hold pro-choice views, has drawn a lot of focus in the days since Supreme Court Justice Anthony Kennedy announced his retirement. She could cast the deciding vote to approve — or disapprove — Trump's Supreme Court pick. And now, people are sending Susan Collins coat hangers to remind her exactly how important her vote is.


The Cut discussed people on social media sharing their order confirmations of coat hangers sent to Collins' office, an act that is reminiscent of previous pro-choice protests in places as varied as Ohio and Poland. It's a throwback to the time before Roe v. Wade, when women sometimes resorted to unsafe abortions carried out using coat hangers, as Broadly reported. According to a report from the Guttmacher Institute, between 200,000 and 1.2 million women obtained illegal abortions each year in the 1950s and '60s, and death from these procedures was not uncommon.

By sending coat hangers to Collins, these activists seem to be making it clear that this is what they believe is on the line — women's right to essential health care. The Portland Press Herald reported that Collins had said that she would not hold potential nominees to a litmus test regarding their stance on Roe, and women immediately responded by beginning to send the coat hangers.

The Supreme Court on Tuesday blocked enforcement of a California law that requires faith-based crisis pregnancy centers to notify patients that the state offers subsidized medical care, including abortions.

By a 5-4 vote, the justices said the disclosure rule likely amounts to compelled speech that violates the 1st Amendment. The court did not strike down the California law, but sent the case back to lower courts with instructions that enforcement of key provisions be immediately blocked while the legal challenge continues.

The Trump administration’s latest attack on housing assistance would boost rents by an average 26 percent for millions of financially vulnerable Americans and increase the risk of homelessness, a Center on Budget and Policy Priorities analysis found.


Under the plan, which still needs Congressional approval, people receiving housing assistance would see the percentage of their total income they are required to pay towards housing increase from 30 to 35 percent. It would also raise the minimum monthly rent on the 712,000 most financially vulnerable families from $50 to $150 per month, eliminate deductions for medical care and child care, and allow housing authorities to impose work requirements.

If Donald Trump finds himself hungry near one of Robert DeNiro's restaurants, he should just keep on walking. In an interview with the Daily Mail, DeNiro said Trump is banned from all Nobu restaurants, the chain he co-founded over 20 years ago. The actor added that he'd leave any restaurant, Nobu or otherwise, if Trump walked in the door.

Men Accused of Sexual Misconduct Are Still Benefiting From Their Restaurants

As chefs and restaurateurs “step away from day-to-day operations” following sexual misconduct allegations, their restaurant groups are left to figure out how to recover. There isn’t a single path forward, according to a new report from the New York Times, and the groups once led by Mario Batali, Ken Friedman, John Besh, and Charlie Hallowell are all struggling to repair damaged reputations and toxic cultures — oftentimes, while the bad actors still have financial ties to the group.

After Eater NY broke news of multiple sexual misconduct allegations against Batali, the chef announced he would “step away” from Batali & Bastianich Hospitality Group and its restaurants. In a letter sent to staff a few days later, the group announced that it would change its name and that its female partners, Nancy Silverton and Lidia Bastianich, would be taking on greater leadership roles in an effort to improve the culture at B&B restaurants.

However, Batali remains financially linked to some of the group’s high-profile restaurants, like Babbo and Del Posto, and according to Joe Bastianich, it’s unclear whether or not that tie will be severed. “

Sexual Harassment Is Pervasive in the Restaurant Industry. Here’s What Needs to Change