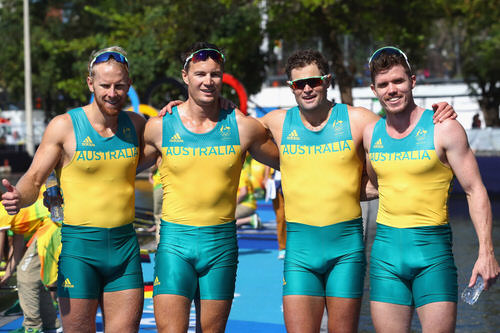 Ladies and gentlemen, there’s a pressing issue we need to tackle.

And it involves the Olympic outfits for the Australian male rowers.

After bemoaning the inequality in the men’s and women’s beach volleyball uniforms just two days ago (i.e., women wearing skimpy outfits, men basically wearing pajamas), we must say, it’s refreshing to see the tables turned somewhat. For a fraction of a second, the focus has shifted from the sporting triumph to the physical “attributes” of the male competitors.

For some countries, the lower half of their rowing suit is a demure, modesty-maintaining black.

Now, we like to think that we’re mature adults. We pay our taxes, hold down full-time jobs and fill out the Census (just kidding! — that’s impossible), but it’s difficult to look at that image without turning into a gutter-minded 15-year-old.