Supervillain / anti-hero Harley Quinn is a fan favourite in the LGBTQ community, and not least for her relationship with fellow villain Poison Ivy. And although the cartoon series on the DC Universe streaming service has hinted at their relationship, it hasn’t been explicit with it.

But in the second season, which began airing on Friday (3 April), this is set to change, with a small moment in the trailer showing Harley and Ivy briefly holding hands.

And speaking to Metro, the show’s showrunner, Patrick Schumacker has confirmed that this relationship will be explored. “It will develop more, and it’s definitely going to evolve into, I think, what a lot of people are hoping it will,” he explained. 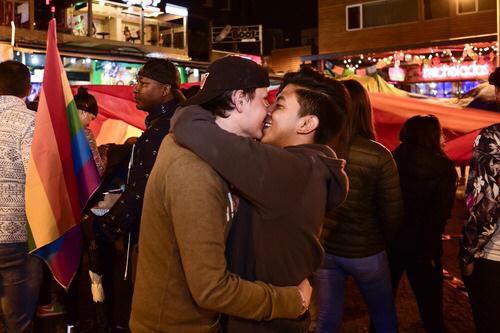 Ecuador's highest court has ruled to recognize same-sex marriage, marking a watershed moment for LGBTQ rights in the Catholic-majority country.

Judges on Quito's constitutional court ruled five-to-four on Wednesday to overhaul the country's laws, arguing that its current marriage legislation was discriminatory and unconstitutional, and that same-sex couples should be allowed equal rights.

The four dissenting judges said that changes to the Ecuadorean constitution should be decided and approved by the government and not the court.

Ecuador's National Assembly will still be required to officially change the laws that define the institution of marriage. Constitutional lawyer Salim Zaidán told CNN, however, that Wednesday's verdict was binding and that same-sex couples would be able to marry as soon as the constitutional court notifies local government offices of their decision. The court has 10 days to do so.

‘My Little Pony’ To Introduce A Lesbian Couple This Weekend

Star Wars Rebels star Taylor Gray knows Dave Filoni left some wiggle room regarding Ezra Bridger's fate at the end of the series, and Gray would be more than happy to shimmy into that space if given the chance.

Wait, You Never Heard of Danger and Eggs?

Disney unveils its first ever male princess — with chest hair!

The gay agenda is at it again, and this time it’s out to brainwash children into believing they can be free to express themselves. The horror!

In a recent episode of the Disney animated series Star vs. The Forces of Evil, a boy named Marco creates a female alter-ego — Princess Marco Turdina — in order to infiltrate ‘St. Olga’s Reform School for Wayward Princesses.’ Once inside, he leads the girls to revolt against the authoritarian headmistress, helping the other princesses to believe they can be themselves.

The ousted headmistress, Ms. Heinous, returns, outing Princess Marco as a fake because he has chest hair.

“That doesn’t prove anything,” one princess in the crowd replies. “Princesses can be hairy!”

The Simpsons unveiled a fun fantasy world inhabited by Homer Serfson in Sunday night’s season premiere, but at the end of the episode, the animated comedy got serious about a dire real-world issue. A still image, shown for five seconds, depicted all of the Springfield characters gathered together in support of hurricane-ravaged Puerto Rico, with the Simpsons somberly and resolutely asking for help. Marge is holding a “Unido” sign, while Homer, Bart, and Maggie join her in holding the Puerto Rican flag. Lisa is standing in front with a tear rolling out of her eye.

21 LGBTI celebs who are proud parents to adorable dogs

In a landmark move, the new character is black.

While she still has no name, the new Powerpuff Girl will be purple-themed.

'Batman' at 25: Hirings, Firings and Other Last-Minute Changes Behind the Animated Classic

Many actors have worn the cape and cowl — but for fans of Batman: The Animated Series, there is only one true Batman: Kevin Conroy.

Batman: The Animated Series is considered the greatest comic book cartoon of the '90s, and many consider it the greatest of all time. Animator and writer Bruce Timm had a vision for a noir-heavy take on the DC character, one that would depart from Adam West's 1960s campiness and inject a dose of Tim Burton's gothic-tinged Batman films.

Running from 1992-95, the series won four Emmys, including outstanding animated program (1993), and launched a 25-year (and counting) reign for of Conroy's Batman. It gave Star Wars star Mark Hamill a second iconic role, and introuced the world to Harley Quinn (Arleen Sorkin), who has gone on to become one of DC's most popular characters after starting as a co-dependent girlfriend to The Joker.

Barack Obama and Joe Biden have been out of office for just over 200 days, but writer and filmmaker Adam Reid isn't ready to let them go.

He's created an animated sci-fi story featuring the former president and vice president. Together the two travel back in time with astrophysicist Neil DeGrasse Tyson as as their guide. The "brothers from different mothers" fight injustice, save history, learn science, and right wrongs — all in the nick of time.

This is the promise of Barry & Joe — The Animated Series. Reid is trying to raise $100,000 on Kickstarter by the end of the month to put together a mini, 11-minute pilot episode of the animated politicians traveling back to their younger days. He's netted nearly $77,000 as of this writing.