A New Jersey Staples shopper with her nose poking out of her mask pushed another woman to the ground, breaking her leg, after being told to keep her uncovered schnoz six feet away.

The social-distancing encounter unfolded just after 3:15 p.m. on Wednesday at a Hackensack location, where the unknown assailant improperly wearing a mask walked up a 54-year-old woman using a copy machine, police said.

‘Are You Two a Couple of Fags?’ — Oklahoma Realtor Beaten Unconscious After Honking to Get Into Parking Space: WATCH

Christian Council, an Oklahoma City-area realtor was beaten unconscious last week by two people, identified as Amery Dickerson and Bennett Stone, who used anti-gay slurs as they hit him in the head.

Council said it was early Saturday morning when he arrived home with a friend and honked when he saw a car was blocking his parking space. the car moved and after he parked and got out two people approached him. 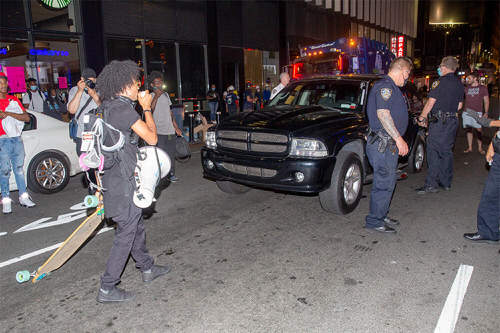 An SUV driver was taken in custody after driving through a crowd and over a barrier of bicycles that Black Lives Matters protesters used to try to prevent traffic on a Midtown road, police sources said.

The confrontation between the activists and the driver of a Dodge Durango unfolded at 42nd Street and Sixth Avenue at about 9:10 p.m., according to witnesses and police.

The man was driving westbound on 42nd Street, when he was surrounded by roughly a dozen protesters, many on bikes, who were attempting to block access to the road for five minutes as marchers made their way to Bryant Park, an organizer told The Post.

As the ralliers tried to shut off road access, positioning themselves around the SUV, “the driver kept moving,” the organizer, who identified as Mary, 23, said.

Birdwatcher not cooperating with investigation into Central Park ‘Karen’

Customer Shoves Walmart Worker, Tells Him to 'Go Back to Your Own County'

An Illinois woman said she believes in “white power” while explaining why she wasn’t wearing a face mask at a Home Depot, video shows.

The woman, identified by cops as 54-year-old Teri A. Hill, allegedly got enraged when another shopper reminded her to keep her own mask on while complaining to an employee Friday that too many customers weren’t wearing face coverings at a store in McHenry.

As Slavery Allegations Continue To Surround Boohoo, Why Fast Fashion Will Never Be The Same Again

Pennsylvania police are investigating an incident that was captured on video that showed a white man pointing a gun at a black man for telling people to practice social distancing as he cycled by a restaurant with outdoor seating.

In the disturbing video, the white man, who has been identified as Jemil Atlig, is seen standing in front of a dining table as he points the gun at the black man.

A woman, who jumped in between the two men is heard yelling: 'Put the gun away! He's doing nothing!'

PICTURED: Man, 27, who knocked down and killed Black Lives Matter protester when he 'drove down ramp the wrong way'

An 8-year-old boy was shot and killed when someone opened fire at a mall in Hoover, Alabama, on Friday.

The Hoover Police Department said they were called to the scene at the food court of Riverchase Galleria mall around 3:18 p.m. with multiple victims.

Derzis did not release the name of the child, but AL.com reported his name was Royta.

The crime is a felony and carries a maximum prison sentence of 10 years.

What we know about a shooting at a protest in Louisville

Texas police say they have identified a man who allegedly threw lettuce and steak at grocery store staff on Mother's Day after becoming enraged about meat purchasing limits amid the COVID-19 pandemic.

A California man sported a Nazi Swastika flag on his mask while grocery shopping in the same town where a man wore a KKK hood in another store, in an apparent jab at Governor Gavin Newsom.

An off-duty Alabama police officer was caught on camera body-slamming a woman in Walmart in an altercation that cops say began because she wasn’t wearing a facemask.

Former sex worker who used Aldi bags to try and conceal the body of a man allegedly 'murdered, dismembered and left to rot in a shower' by her lover is jailed for five years

Specsavers eye doctor, 50, is suspended for not revealing conviction for drunken streak as a student TWENTY TWO years ago

Missing N.C. Mom Is Found Buried on Property of Man Who Reported Disappearance, Who's Now Charged