He wrote: “Jake’s a pretty casually physically affectionate guy in general… I’m not as much that way as he is because I was kinda raised in ‘men don’t hug’ kinda household where physical affection was rarely given, if it was given at all, but I’m cool with him being like that and actually kinda appreciate it.”

The two men are currently on lockdown because of the coronavirus pandemic, and have only had each other for company.

The original poster (OP) said he has a condition which causes extreme fatigue and so he needs to take naps during the day, and used to do this on the sofa when his roommate was out.

He said: “Since quarantine, he’s obviously been here every time. He’s been very accommodating and sweet about it.

Wife concerned her husband masturbates with his best friend, doesn’t know what to do about it 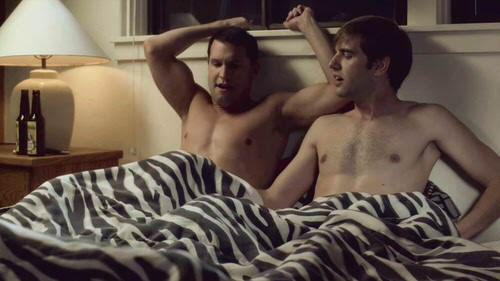 The woman and her husband, both in their 30s, have been together for about six years and married for two. Last year, they met up with her husband’s childhood friend and his fiancée for drinks.

At some point during the evening, the topic of sex came up. The woman says she was shocked to learn that her husband and his buddy used to jerk off together when they were younger.

“It turns out they masturbated together as teenagers, which included ‘giving each other a hand’,” she writes. “I was taken aback by this, but they all seemed to think it was hilarious, and my husband was embarrassed, so I shrugged it off. Teenagers do things. We didn’t talk about it again.”

Cut to one year later.

A new Reddit thread asks hetero guys the question many of us are dying to know: “As a straight guy, what’s the gayest thing you’ve done?”

The thread was posted just yesterday and has already garnered over 7,000 responses.

“I’m a professional body piercer,” one guy writes. “I touch other dudes’ dicks all the time.”

Straight college dudes really like making out with their bros, study finds

This just in: straight college guys, especially guys belonging to fraternities, love making out with each other. At least, according to a new study published in Sexuality & Culture.

The study surveyed nearly 450 men from 11 different universities all across the country. Researchers also conducted in-depth interviews with 75 men, all of whom described themselves as heterosexual.