Five Guys employees were fired for refusing to serve police officers in Alabama, as tension mounts between service workers and law enforcement

"Five Guys and the Daphne, AL franchise want to thank the Daphne Police Department for their support in working together toward a resolution," the post reads. "As we uphold our commitment to fair, respectful, and equal treatment for all customers, please know that the actions and sentiments of a few employees in Daphne, AL do not represent Five Guys or the local franchisee."

The Five Guys incident is the latest in a series of confrontations between restaurant workers and police officers in recent weeks amid nationwide protests against racism and police brutality in response to the killing of George Floyd and Breonna Taylor.

That same month, three police officers in Manhattan claimed they were deliberately poisoned by Shake Shack employees after they fell ill from ingesting a mysterious substance in their milkshakes.

In Parkland, one side of the street chanted ‘Black Lives Matter.’ The other, ‘U.S.A.’

Police arrest the convicted felon who allegedly sucker-punched a 12-year-old boy. The assault was caught on video.

An 86-year-old was sinking in debt and suffering hallucinations. Then he robbed a bank.

The head of the Minneapolis police union says George Floyd’s “violent criminal history” needs to be remembered and that the protests over his death are the work of a “terrorist movement.”

“What is not being told is the violent criminal history of George Floyd. The media will not air this,” police union president Bob Kroll told his members in a letter posted Monday on Twitter.

Floyd had landed five years behind bars in 2009 for an assault and robbery two years earlier, and before that, had been convicted of charges ranging from theft with a firearm to drugs, the Daily Mail reported. 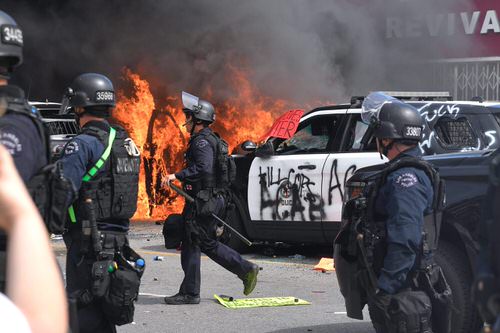 When it comes to race relations, anyone who thinks rioting is the answer doesn’t grasp the question. Burning, looting and committing mayhem doesn’t bend the moral arc of the universe; it breaks it.

Peaceful protests over George Floyd’s killing have been overshadowed by images of rage-fueled violence and destruction. Resorting to rioting is strange because there is little disagreement that Floyd’s death in custody was senseless and criminal. Few defend the police who were responsible; they were quickly fired, one has been charged with murder, and the Justice Department has opened an investigation into the tragedy. Everyone is on the same side of this issue.

Yet rioting sparked and spread. There is no rational purpose behind people burning buildings, torching cars, breaking windows, spray-painting obscenities and the other actions that have left city blocks looking like war zones. Some say these are expressions of anger and frustration, and maybe so, but they are also unjustified, foolish and counterproductive. While peaceful protesters are trying to create sympathy and build understanding, the rioters have undone that effort with flying bricks and flaming city blocks.

Far-right extremists are showing up, with guns, to the protests against police brutality that have exploded across the country.

Others are egging on the violence from behind their computers, urging followers to carry out acts of violence against black protesters with the goal of sparking a “race war.”

Their presence makes an uneasy addition to the escalating unrest, which was triggered by the death of George Floyd, a black man who was choked to death by a white Minneapolis police officer earlier this week.

But there’s a range of motivations that’s driving far-right interest toward the protests, which are being led by community members and Black Lives Matter, and bolstered by antifascists.

For example, the so-called Boogaloo Bois — a group of armed anti-government extremists made visible by their Hawaiian shirts — have reportedly shown up to some of the protests. 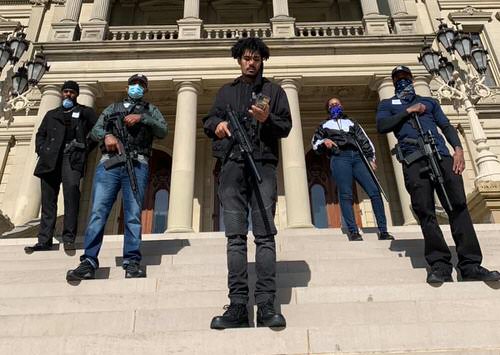 A black lawmaker came to Michigan’s capitol with an escort of armed black citizens on Wednesday, days after white protesters with guns staged a volatile protest inside the state house, comparing the Democratic governor’s public health orders to “tyranny”.

The state representative Sarah Anthony, 36, said she wanted to highlight what she saw as the failure of the Michigan capitol police to provide legislators with adequate security during the protest, which saw demonstrators with rifles standing in the legislative chamber above lawmakers.

“When traditional systems, whether it’s law enforcement or whatever, fail us, we also have the ability to take care of ourselves,” she told the Guardian. Anthony became the first African American woman elected to represent her district in Lansing, Michigan’s capital, in 2018.