All Posts Tagged as 'Replacement'

Well, we wouldn’t exactly call this an upgrade…

A statue of Charles Aycock, the 50th governor of North Carolina who was a strong proponent of white supremacy at the turn of the 20th century, has been standing at the National Statuary Hall at the Capitol since 1932.

However, last month House Democrats proposed the removal of “racial intolerance” statues from Capitol in light of the Black Lives Matter protests and activists’s staunch efforts to erase systemic racism. Speaker Nancy Pelosi responded to these demands by calling for the removal of Confederate statues in the National Statuary Hall Collection — which houses 35 of the 100 statues collected in D.C., two representing each state — and for them to be returned to their home states. The North Carolina legislative committee has now approved a replacement statue: that of homophobic preacher Billy Graham, one of the most famous Christian evangelists in history, having died in 2018 at the age of 99.

With Ellen DeGeneres' future on TV hanging in the balance -- even though her team swears she's returning -- rumors have already begun to circulate about who may be the next star in line to take over the daytime throne. Those rumors have fallen at the doorstep of "The Late Late Show" host James Corden, but as many believed the singing host to be one of the nicest people in Hollywood, others are now claiming Corden is not as nice as he appears on TV.

The reports first surfaced through UK outlet, The Sun, who claims 41-year-old Corden has been thought of as the "long term successor" by network executives before Ellen's scandal went public.

"Y'all know people in the UK absolutely LOATHE James Corden, right?" one fan wrote on Twitter.

They added, "There are so many stories about that dude, it would make your head spin. All the shit you've heard/read about Ellen, apply it to James. Seriously."

The whack-a-mole of cancel culture moves swiftly, so you'd be forgiven for forgetting that just two short months ago, according to the unremitting jury of Twitter, the supermodel Tyra Banks got canceled forever. It would be especially understandable considering that, earlier this week, ABC announced that Banks would be the new host and executive producer of "Dancing with the Stars."

A few short examples from her rap: in cycle eight of "ANTM," which Banks created and executive produced, a contestant was told to pose "dead" in a casket for a photo shoot only a week after discovering that her friend had died of an overdose. Cycle four featured a photo shoot where contestants had to pose made up as different ethnicities. On the fifth cycle, Banks told a gay contestant to tone down her sexuality. She pulled no punches -- and taking sensitive care of her model hopefuls trailed far behind the obvious priority of
making scintillating television. 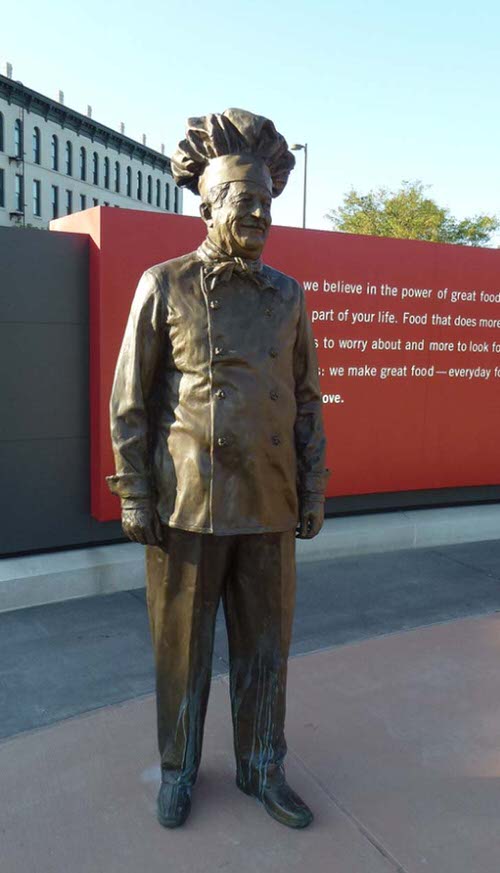 An online campaign is calling for Cleveland officials to replace a Christopher Columbus statue with one of "the iconic" Ettore Boiardi, also known as Chef Boyardee.

The petition stated that Columbus statue, located at the Tony Brush Park in Cleveland's Little Italy, celebrates a person who "initiated the genocide against Indigenous Americans."

Black Mississippi Mayor Tears Up as He Signs Order to Remove State Flag: 'Time for Waiting Is Over'