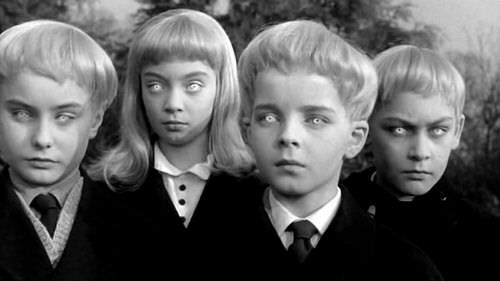 A small town mysteriously blacks out for several hours. Weeks later, the fertile and virginal become pregnant. The teens are horrified, the wives are wary and the husbands who were not fucking their wives become suicidal. The children are born healthier, smarter, with mind reading and control capabilities and a united unfeeling force. The film doesn't drag itself with science but it contemplates the dread of a parent who has borne an unknown conqueror into the world. The town shuns or avoids them, some try appeasement, others want them locked away and many want them destroyed. The little darlings are the new marshal in town and nobody messes with these unfeeling fuckers. George Sanders provides his "everything makes sense when I do it" persona and is the adoptive father of the children. He wants to understand them and mesh their purpose with earth civilization but his heart and scientific curiosity minimizes their threat. There were occurrences and reactions around the world where the children invaded, were massacred or imprisoned and mothers murdered for defying God that were spoken of but not filmed. Ready made sequels. 05-Oct-2020